After only two years, the growing company, Elektroimportøren, achieved a return of investment (ROI) on its AutoStore system. Now, it is time to prepare for further growth.

Elektroimportøren is a supplier of all electrical equipment for both B2B and B2C segments. With an enormous growth in recent years, the turnover has gone from 20 million Euros in 2014, to 100 million Euros in the last twelve months.

With this impressive growth, it became clear that there was a need for a new warehouse, and to streamline the existing processes. Hence in 2017, the choice to automate was made, and already two years later, Elektroimportøren had a return of its AutoStore investment.

– We have been focusing on the cost, and not increasing it in line with our turnover, says André Swensen, Logistics Director at Elektroimportøren.

As Elektroimportøren had already decided to expand operations with a new warehouse, it became natural to involve Element Logic in the entire construction process to optimize for AutoStore. 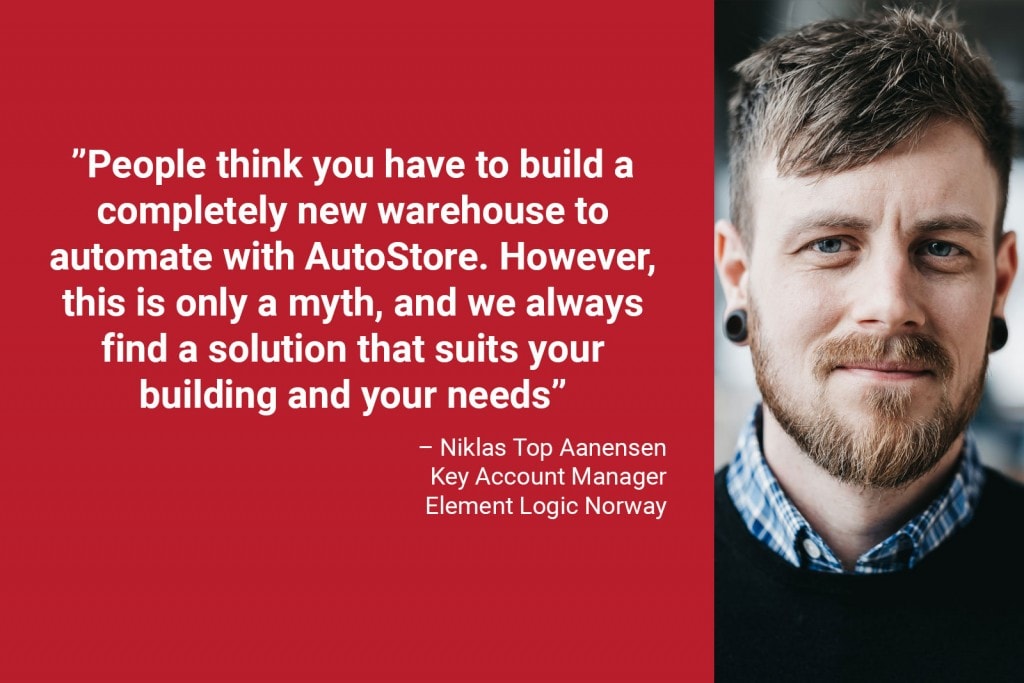 – People think you have to build a completely new warehouse to automate with AutoStore. However, this is only a myth, and we always find a solution that suits your building and your needs, says Niklas Top Aanensen, Key Account Manager at Element Logic Norway.

It was a big decision for Elektroimportøren to automate its warehouse, but with thorough guidance from Element Logic, the process went quickly, and the result was above all expectations.

Want to know the truth about more automation myths?

– It hurts a little when you hear the word automation in the logistics industry in terms of risk. However, now that we have become familiar with the robot system, it is clear that AutoStore primarily is a system for compact and smart storage, says Swensen.

Expands the AutoStore system in 2020

The growth of Elektroimportøren does not seem to stop soon, and as a result, the decision to expand AutoStore further was made. The expansion consists of 9.600 bins, a picking tunnel, 4 port frames and 8 new robots. This is virtually twice the current system.

– Elektroimportøren is thinking ahead with the expansion of its AutoStore system. As it is today, there is still room for more bins, and the warehouse is thus well equipped for further growth, says Aanensen.

The decision to expand for future growth came after thorough discussions with experts from Element Logic.

– Expanding AutoStore comes with costs, but by implementing a larger extension of the warehouse that provides space to grow, Elektroimportøren saves money and time on separate expenses such as electricians and installation, says Aanensen.

When Elektroimportøren first invested in AutoStore in 2017, cost and ROI were top priorities. It was estimated that it would take between three to four years before the investment was returned, but in reality, it ended up taking only two years.

– During the planning of the extension with Elektroimportøren in 2020, ROI was not a topic any longer. It was unquestionable, says Aanensen.

For other companies in a growth phase, the advice from Elektroimportøren is clear:

Take a closer look at Elektroimportøren’s AutoStore solution in this video:

Facts and figures (after the extension)

Want to learn more about our solutions?