With a compact AutoStore system and implementation of a warehouse management system, Styleboom now has throughput and maximum flexibility in their new warehouse.

Styleboom is located in Geldern, Germany, and sells fashion clothing online under the brand Seventy-seven urban streetwear. As part of a fundamental restructuring, Styleboom moved into new facilities in 2020, and implemented warehouse automation and picking processes that increased their effi-ciency, capacity and optimized their processes.

“Our previous location no longer offered any possibilities for adapting the logistics to our rapid growing company,” Tomasz Stefanowski, Operations Manager Styleboom explains. “The customer orders were picked manually based on the article number in a multi-level shelving system. This resulted in high stress levels for employees, inefficient processes, and a high picking error rate, which was un-sustainable for our quality standards,” Stefanowski sums up.

The contract for the new logistics centre was signed early 2020, with an investor. In parallel, Style-boom replanned the logistics processes for the three planned warehouse segments and looked for an optimal automation solution for efficient storage and picking processes. Based on Styleboom’s needs AutoStore was the only option and Element Logic, was given the contract to implement it.

“The advantages of the system quickly convinced us. With an AutoStore solution from Element Logic, we were able to reduce the required warehouse area from 4,500 sqm of shelving to 1,300 sqm of floor space. The system was also designed exactly to the conditions of the 7.50 m high hall and can be scaled in terms of performance and capacity. The AutoStore system is the optimal solution for our requirements”, says Stafanowski.

Three months after signing the contract, assembly could begin at Styleboom. The material was brought in just 5 weeks later, followed by a final testing and training phase. After a total of 25 weeks, the system was installed, linked to the newly implemented warehouse management system (WMS) and connected to their ERP system via an interface. The new site offers 8,160 m² of warehouse space, which is divided into three warehouse segments, in addition to 950 m² of office space, photo studio and social rooms.

Compared to other automated warehouse systems, this system enables a 60 to 70 percent improvement in space utilization. The loading stations are part of the storage cube and are accessed by the robots during off-peak periods.

Once picking is triggered by the WMS, employees can pick continuously. “Within three seconds, a new bin is presented in the port,” Stefanowski emphasizes with satisfaction. “The AutoStore system knows which bin is in which place, calculates the travel paths and then distributes the orders to the robots via a radio link. The robots work in a coordinated manner, quickly rearranging the bins, providing the required bin for direct access, and supplying the bins for the integrated ports for order picking.

The system is acting according to current ABC criteria: Less frequently requested bins are successively lowered to the lower storage levels, while fast-moving items remain on the upper levels for quick access.

Expansion of the warehouse in mid-2021

In September 2020, Styleboom commissioned a basic system with 52,000 bins on 16 levels and 52 robots as well as seven carousel ports that can be used for goods both inbound and outbound. Due to the rapid increase in order volume and the disproportionate growth of the company of around 35 percent, the system was initially expanded by one port and four robots in the following months. Growing shipping volumes in the fashion sector generally also increased the volume of returns. In a second expansion, Styleboom increased the capacity of the warehouse in mid-2021 by integrating two extra ports and 20 robots. A total of 74 robots are now in operation in the online retailer’s logistics centre. 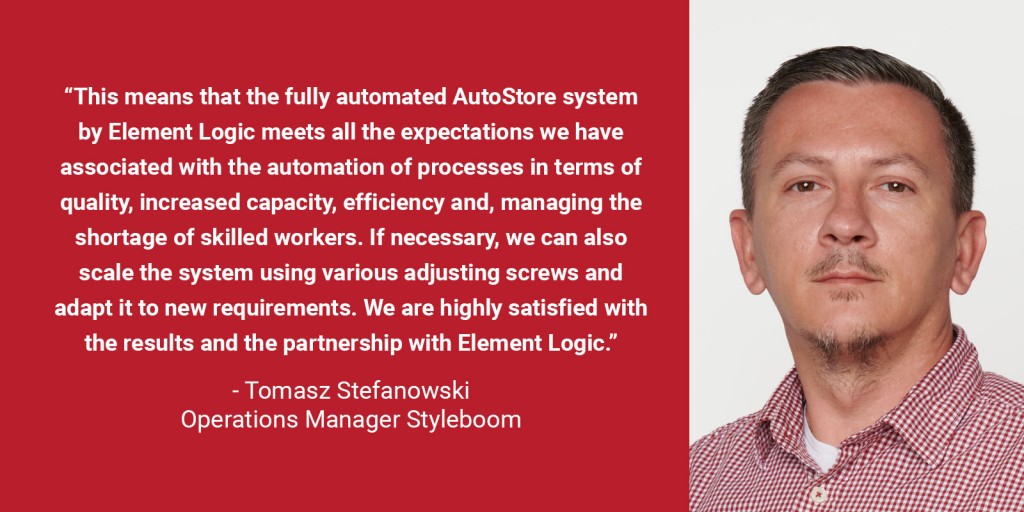 Picking and insertion take place at eight carousel and two conveyor ports – which enabled an increase in efficiency by a factor of 6. “With the system, 14 employees can pick the same volume of orders as 80 to 90 employees previously did with manual processes,” explains operations manager Stefanowski. “We efficiently pick 6,000 orders a day with zero errors and no back orders. This allows us to easily implement further growth without significantly increasing the number of employees.” In addition, there is software-supported end-to-end transparency over order processing. Finally, the picking processes at the ports are virtually self-explanatory thanks to display-based menu navigation. “Within 30 minutes, new employees can be trained and pick without errors,” Stefanowski concludes.

“This means that the fully automated AutoStore system by Element Logic meets all the expectations we have associated with the automation of processes in terms of quality, increased capacity, efficiency and, managing the shortage of skilled workers. If necessary, we can also scale the system using various adjusting screws and adapt it to new requirements. We are highly satisfied with the results and the partnership with Element Logic.” 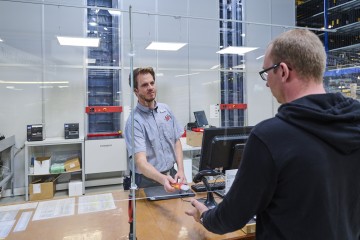 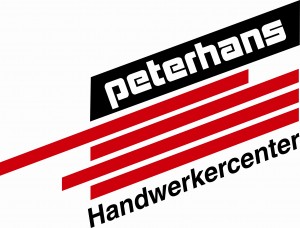